The growing demand for lithium-ion batteries (LIBs) has created incentives to improve processes for extracting lithium from brine. Current Li-extraction processes involve pumping brine from underground into shallow pools for evaporation and concentration. But the traditional method has several significant limitations, including its requirement for large flat areas for ponds and a dry climate for evaporation. Further, the process takes over a year, only recovers 50% of available Li and comes with challenges in achieving high purities.

Standard Lithium Ltd. (Vancouver, B.C.; www.standardlithium.com) has developed a new process to overcome these limitations, while taking advantage of waste brine from another process as a resource. As a raw material, the process utilizes brine that has already been pumped from underground for the extraction of bromine. The company has partnered with Lanxess AG (Cologne, Germany; www.lanxess.com), which owns a bromine-extraction operation in southern Arkansas that is part of its flame-retardant chemicals business.

“The technology piggybacks on all of the R&D work that has been conducted for LIBs,” says Robert Mintak, CEO of Standard Lithium. “We are able to bolt this new adsorbent-based extraction process onto the back end of the bromine operation, where we have access to large volumes of brine that are already at the surface.”

The Li-extraction process (diagram) takes advantage of the fact that the brine leaves the bromine process heated to approximately 70°C. This means that no additional energy is required, and the reaction kinetics for the adsorption are suitable, Mintak explains. The process is capable of reducing the time required for Li extraction from months (with the evaporation pools) to hours, and is capable of producing a high-purity LiCl solution for further processing in the battery industry.

The Li-extraction operation is currently operating as a “mini-pilot project,” and a larger skid-mounted pilot plant will be deployed at one of Lanxess’ Smackover Brine processing sites later this year. 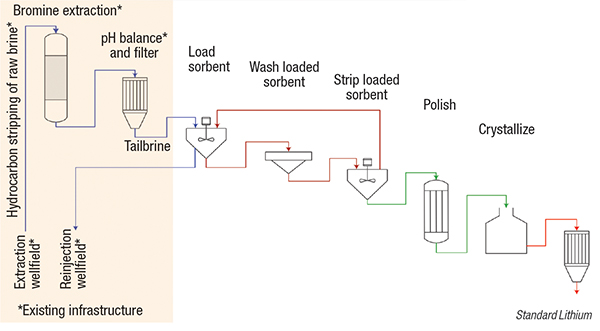